Cookies help us deliver our services. By using our services, you agree to our use of cookies.

These links and documents contain information about best practices for tissue sample collection. 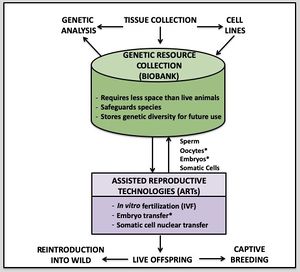 Role of genetic resource collections in the research and conservation of amphibians from Zimkus, Hassapakis, and Houck (2019). Green indicates the storage of tissues in biobanks. Purple indicates procedures associated with Assisted Reproductive Technologies (ARTs) that lead to achieving multiple goals in amphibian research and conservation. Asterisk (*) denotes tissue or methodologies that are not currently used in ARTs but may be possible in the future.
Numerous methods are currently being used to preserve tissue and likely depend on the specific aim of a scientific study or goals of an institutional or collaborative program (e.g., biobank, multi-institution initiative). Samples may be collected for individual research projects with explicit and relatively short-term goals (e.g., molecular ecology, molecular phylogeny, population genetics). Studies may also be taxonomically or regionally focused, such as rapid biodiversity assessments that use DNA barcoding techniques to identify species surveyed in a specific region. In contrast, biobanking initiatives or collaborative programs involving multiple institutions may have targeted specific species for long-term conservation and/or use in Assisted Reproductive Technologies (ARTs). The ultimate aim of a research study or conservation initiative may dictate the specific tissue types or biomolecules needed to fulfill the project goals. Molecular studies traditionally used DNA as it could be preserved more easily in the field with many methods. Unfortunately, the various methods used for DNA preservation are not equally effective, and DNA may be fragmented or otherwise compromised. Some preparations may allow high-quality Sanger sequencing reads but prevent high-quality gDNA needed to sequence genomes or the high-molecular-weight DNA needed for long-read sequencing and other technologies (e.g., BAC library preparation, optical mapping, 10X Chromium libraries). RNA is increasingly being used in gene expression studies but is preserved using fewer methods and degrades rapidly if not frozen immediately. Researchers should, therefore, consider all preservation options as some may allow them to both fulfill their study goals and aid in current or future research or conservation initiatives. In addition, those Researchers collecting samples need to consider the location of initial preservation and if possible carry out a feasibility study to ensure that the selected preservation method(s) will work given any logistical constraints.

One area of immense variability is with the number of vial types used in natural history collections [1].

- Externally-threaded closures promoteb more sterile conditions because internal threading can allow contaminants to enter if the cap is placed on an unclean surface when removed, but these vials can be susceptible to cracks and loss of air-tightness, which can lead to sample dessication or oxidation [2] [3].
-Internally-threaded vials might allow increased storage capacity, depending on the vial selected, but users also suggest that material can be trapped within the threads of this vial type [4].

- Care must be taken if the vial cap is over-tightened because the gasket can become distended.
- The presence of gaskets or O-ring might improve the initial performance of seals but can be problematic when used with some alcohols (e.g., ethanol) because some gasket material, such as silicone, is vapor permeable.

- As a precaution, vial manufacturers recommend that samples not be immersed in LN2 unless they have secondary containment. Heat-sealing vials into flexible polyethylene tubing is recommended for safe storage in the liquid-phase environment.

-Many researchers include specimen tags inside vials, but paper inside vials not ideal because of possible contamination

Some general recommendations include:

- Only place one tissue type in each vial
- Epigenetic studies require same tissue type for all samples in study (i.e., all muscle)

- Testes provide high yields and are the preferred tissue in species with heterogametic or temperature-dependent sex determination, while liver is recommended for immature specimens and homogametic individuals (females in XY, males in ZW systems) (Wong et al., 2012)
- Soft tissues (e.g., spleen, pancreas, lung, glands) are prone to faster degradation, so harder tissues (e.g., muscle, kidney, heart) may be preferable (Wong et al., 2012)
- Red blood cells are a good source of high-molecular-weight DNA and are the preferred tissue for constructing large-insert libraries and for use in long read sequencing (Wong et al., 2012)

The methods currently used to preserve genetic material during initial sampling vary widely owing to the sampling location, tissue type, and intended research use. A comprehensive treatise of methods to preserve genetic samples is discussed in Nagy (2010)[5]. In a survey of genetic resource collections associated with natural history museums, samples were found to be initially preserved in a variety of different ways. [1]. Zimkus, Hassapakis, and Houck (2018) discuss these most commonly used methods of sample preservation identified for collections biobanking amphibian genetic resources, addressing the advantages and disadvantages for both researchers making the initial collections and biobankers concerned with long-term storage and downstream use. We provide an overview of these methods, as well as the “tissue piecing” method to allows later initiation of cell culture. 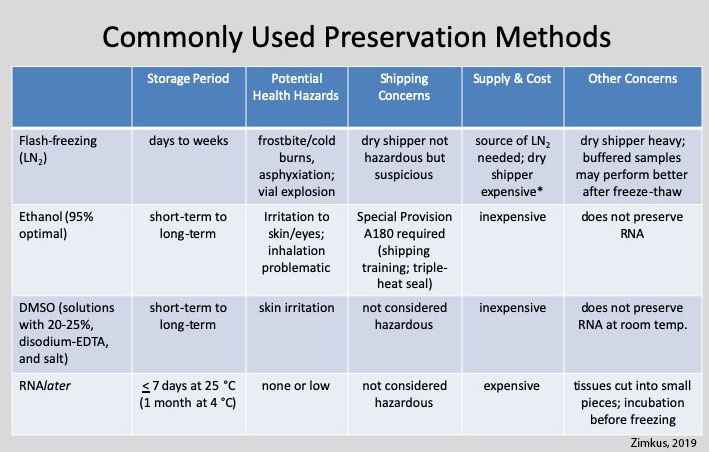 - Access to LN2 increases field sample collection options, including the preservation of tissues useful for cell culture, RNA, and gametes for multiple weeks.
- The use of LN2 requires additional precautions as it can cause frostbite, cold burns, and asphyxiation by displacing the oxygen of the surrounding area.
-Sample vials can shatter when removed from storage because LN2 can enter the vials and rapidly expand upon warming, creating a hazard from both flying debris and exposure to the contents. Secondary containment (e.g., polyethylene tubing, tin foil) and protective eyewear is, therefore, recommended.
- Cross-contamination has been reported for samples immersed directly in LN2, so researchers should consider vial type, secondary containment options, and use of vapor-phase storage when considering flash-freezing methods [6].
-Freezing without the inclusion of a preservative was once thought to maximize future research potential, but data now suggests that buffered samples or those stored in a cryoprotectant, such as DMSO or glycerol, may perform better after thawing and refreezing (Nagy 2010)
-Cryoprotectants partly protect against degradation occurring during temperature changes, such as freeze-thaw cycles. If viable cells are desired (e.g., cell culture, gametes), slow freezing and using a cryoprotectant is required to prevent the formation of ice crystals that lead to fatal cell lysis.

- Dry shippers are not considered a dangerous product and hence can be used to ship samples by plane if the liquid is fully absorbed and excess poured off.
- There are wide variations in dry shippers with regard to size and temperature (static) hold times.
- Size ranges include those with space for a dozen vials to others that can accommodate thousands of vials.
- Temperature hold times can vary from a few days to multiple weeks, and variations also exist in how well they hold temperature under different environmental and handling conditions.

- The transport of non-infectious ethanol-preserved specimens has been allowed since 2011 via International Air Transport Association (IATA) Special Provision A180, making it possible to transport specimens preserved in ethanol. See Shipping and Handling of Dangerous Goods for more information about proper packing and labeling.

- Concentrations above 96% (including absolute ethanol) are not recommended as they likely contain traces of drying agents (e.g., benzene) that can affect DNA preservation (Ito 1992).
- Concentrations of 65–75% (commonly used to preserve whole animals for morphology) are not recommended; Seutin et al. (1991) were unable to recover DNA from bird brain and muscle samples kept in 70% ethanol for six weeks at room temperature, while liver samples yielded significantly degraded DNA.
- Nagy (2010) suggested that tissues be cut into small pieces to increase the surface area, using at least 5:1 volumes ethanol, while others suggest higher ratios (Martin 1977).
- Although the initial concentration and ratio of ethanol to sample is important, changing the alcohol during the first one to two days of storage is also recommended because samples release water and progressively dilute the preservative (Kilpatrick 2002; Nagy 2010).
- Researchers should avoid using distilled alcoholic beverages because they may have alcohol concentrations as low as 35%.
- Undiluted rectified spirits or neutral spirits (e.g., Everclear, Crystal Clear, Primasprit, Spirytus) is highly concentrated (95–96%) but should be avoided because it includes denaturing chemicals.
- Denatured alcohol (i.e., methylated spirits), widely used for industrial purposes, is made of 70–99% ethanol but contains additives that

- DMSO solutions are stable at room temperature, non-toxic and non-flammable.
- These solutions can be carried on airplanes more easily than ethanol.

- Kilpatrick (2002) found that a 3:1 DMSO-salt solution provided the best protection from DNA degradation of mammalian liver tissues stored for up to two years when compared to 95% ethanol and lysis buffer.
- Nagy (2010) recommended that the ratio between DMSO and sample exceed 5:1 but at the very least be 3:1 for effective preservation.

- This product is not recommended for bone because of the lack of sufficient penetration into the tissue.
- Use of RNAlater to preserve RNA in blood and plasma have more involved procedures.

- cut into small pieces (i.e., less than 0.5 cm in one dimension),
- placed in 5–10 volumes of the solution
- incubated overnight at 4 °C to allow thorough penetration; however, if ambient temperature is above 25°C, it is suggested that samples are placed on ice for a few hours after being placed in RNAlater before storing at ambient temperature.

- These cells can be utilized to obtain chromosomes, expanded to generate large quantities of DNA/RNA, and used for SCNT because they are living and dividing (Houck et al. 2017).
-Induced pluripotent stem cells (iPSCs) capable of differentiation into multiple cell types have been generated from skin cells of mammals, including humans, mice, and rhesus monkeys, by direct molecular reprogramming (see Houck et al. 2017 for review).
- More recently these methods were successfully applied to cryopreserved adult fibroblasts of endangered mammal species, including a primate (Mandrillus leucophaeus) and the northern white rhinoceros (Ceratotherium simum cottoni; Ben-Nun et al. 2011; Korody et al. 2017). 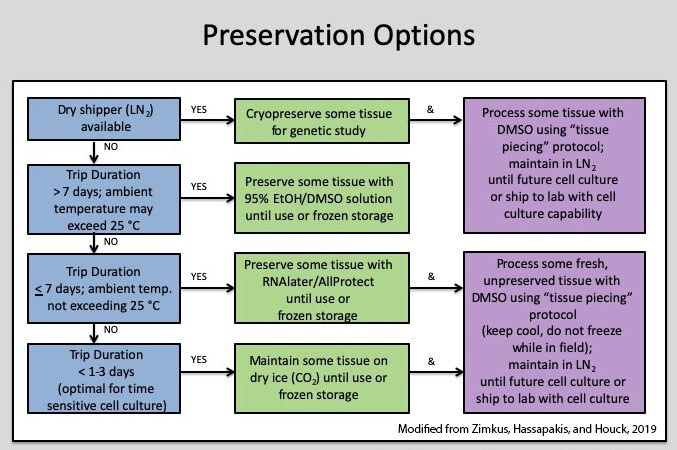 - A small incision can allow researchers to push the liver out, causing minimal damage to specimens being used for morphological study.
- Bile salt can contaminate this organ and affect tissue stability, so tissue should be preserved as soon as possible and the gallbladder avoided (Dessauer et al. 1990).