Cookies help us deliver our services. By using our services, you agree to our use of cookies.

This page is for information Scientific Collecting licenses for lethal take of wildlife, including plants. See also See also Permitting.

Scientific Collecting Licenses authorize the lethal collection of wildlife, generally for purposes of survey, inventory, or targeted scientific research. They are issued at the state, federal, and international levels, and vary based on regulatory agency. Persons proposing scientific collecting should familiarize themselves with local laws and regulations before applying for a collecting license, and in the case of international fieldwork, are encouraged to seek out a local collaborator to help navigate foreign authorities and share in project benefits. Scientific Collecting Licenses apply to protected flora and fauna, which nearly always include vertebrate groups, crustaceans, mollusks, endangered or threatened species of any kind, and plants growing on federal and private lands. All restrictions and exceptions to authorized take will be oultlined in the permit document. Collecting Licenses generally stipulate that project material must be transferred to a public scientific or educational institution, zoological park, museum or scientific society for permanent deposition following authorized collecting activities. 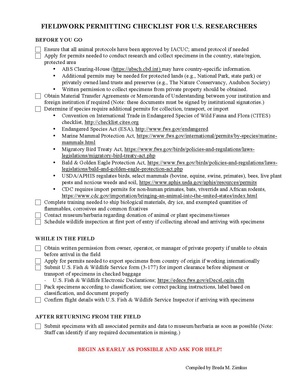